With Father’s Day coming up on Sunday, I’m reflecting on the various types of fathers whom I encounter in my professional and personal lives.  One commonality amongst them is that they love their children; some of them love children who are not even biologically theirs.  The distinction comes with how these fathers show love for their children.  There is a significant difference between being a Father and being a Dad/Daddy; the words are often interchangebly used.

A Father is a male who contributes his sperm to create a child, while a Dad  is a man who invests his time, his love, his care, his concern, his protection and his strength.

Unfortunately, many fathers are not dads.  Children need more than just your physical presence.  Healthy and consistent interactions are essential to raising a child. Kudos to the all of the Dads!  I salute all of the fathers who are actually dads to their children.

I salute ALL Fathers Who Are More Than Just Figures to their children!

Too often we take our fathers who are dads for granted. So, even after this Father’s Day has come and gone, take time to let the dads in your life know that they are appreciated and that they are valued. 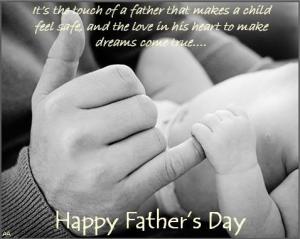 3 thoughts on “Fathers Who Are More Than Figures”