What happens to a dream deferred?

Or does it explode?

I wonder if Langston Hughes understood the impact that this poem would have when he wrote it way back in 1926.  To this day, almost 90 years later this poem has profound meaning. Do you have dreams that are deferred?  As adults we learn the sobering truth that not all dreams come true.  Some disappear, but others linger and reappear.

Right now, I feel like I’m on the cusp of realizing one of my deferred dreams. I recently earned a diploma in Broadcast Media Arts and I’m praying that one day I will realize my dream of becoming an on-air radio personality. I didn’t grow up dreaming about this, I was practical, I just wanted to finish college, get out into the world and make some money.  But, after I graduated from college in 1998, I started thinking less about being practical and more about living life on my own terms.

I initially visited Specs Howard School of Media Arts back in 1999.  However, I became discouraged when I found out that they don’t offer Master’s degrees. I was caught up in the thought that I had to have a Master’s in order to truly be successful.  As I got into the work force, I gained a great deal of experience in the Social Work field. I saw a lot of my colleagues with Master’s degrees who still shared some of my same struggles and yet they only made a few dollars more per hour.

Eventually, I became occupied with my marriage, children and social work career.  I wasn’t motivated to go to anybody’s school or do anything more than what I was already doing. My life became consumed with grown up responsibilities—my dream was deferred. I got to a point where I was bored with simply being a wife, mother, and social worker. Of course I was so much more, but those were the three main roles that dominated my life.

Then last year, I was faced with not having any additional time to defer my college loan payments so I thought, ‘there’s no better time than right now for me to get my butt back into school.’  I knew that I didn’t want to further my social science education, I had already determined that I didn’t want to retire from this career, but I also didn’t know for sure what else I wanted to do.  As I thought about my options, my intuition kept telling me to follow one of my passions. So, I attended an open house at Specs Howard School of Media Arts and I immediately felt a change in my attitude. I felt empowered! I felt strong! I felt happy!

As a non-traditional student, I created all types of imagined fears and anxieties in my mind.  Thank God for my army of supporters made up of my family, friends and colleagues!  I’m also grateful for the faculty and staff at Specs Howard; they have provided me with an immeasurable amount of knowledge, mentoring, guidance and support.

As I neared the end of the program, I was approached by one of my instructors about an internship with the school’s internet radio station, Specsradio.com. Of course, I jumped at the opportunity! I am humbled and thankful for this experience. My instructor is a great mentor; she has helped me to come out of my shell, so to speak.

Recently, some of my friends and associates heard me as I broadcasted live on Specsradio.com.  The feedback that I received made me feel so proud and fulfilled!

My dream was deferred, but it’s not going to ‘fester like a sore’ or ‘dry up like a raisin’. It’s going to EXPLODE! But not in the sense that Langston meant. My dream is exploding with promise and opportunities! One of my main issues is patience. I’m realizing that the journey to success never stops; it’s an ongoing process of dedication, commitment, patience, planning and perseverance.

The other day, my husband told me in frustration, “My dreams don’t matter anymore…I have responsibilities…” Though, I understand his frustration, my love for him and my stubbornness won’t allow me to encourage his defeated attitude. I know that he is worn down by sustaining and improving our lives. I know that he still has dreams. I know that impossible really spells, “I’m possible”. I told him, that I believe in him and I still support his dreams. I told him that I’m not letting him give up on his dreams, especially since his love and support is a big part of why I am realizing my dream of being on the radio.

A Dream Deferred, doesn’t mean that it can’t or won’t be fulfilled. It simply means that you have to work hard and stay focused on achieving what you believe! And be patient while going through the valleys until you reach the mountaintop! 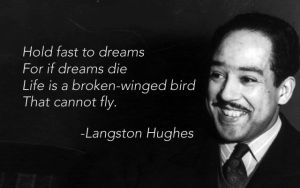