“Come on baby, light my fire
Everything you drop is so tired
Music is supposed to inspire
How come we ain’t getting no higher?”…  “Superstar” by Lauryn Hill

I’m constantly nurturing my nostalgia for the old school Hip-Hop and R&B music that came out during the 80s and 90s(much respect to the 60s/70s era). Not to take away from the hard work of today’s artists, but these new school fools–except for a select few–are wack compared to their predecessors.

I attended the Bring Tha Noise concert this past Saturday and I had one of the best times of my life! Two days later, my right knee was still swole like the gold rope chain that Ice Cube wore during his performance. I was on my feet from beginning to end, screaming and yelling, “Hell Yea!”; dancing, and waving my hands in the air like I just didn’t care! I was transported back to the days of watching, Yo! MTV Raps, The Box (Jukebox), and Rap City. The experience was well worth me delaying a bill payment for the ticket. The show was held at the magnificent Fox Theatre, with its gorgeous decor and superior acoustics! Host/Comedian Mike Bonner kept us dying laughing! The vibe was right, with energy on 10 all night!

Proving that chivalry isn’t dead, the night started off with one of the Queens of Hip-Hop, MC Lyte. Lyte commanded the stage 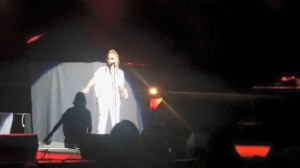 with a balance of humility and confidence, proving that she is anything but, “Paper Thin”. Lyte’s performance oozed grace and maturity.  Along with “Paper Thin”, Lyte performed “Cha Cha Cha”, “Poor Georgie”, “Rough Neck” and her verses from the “I Wanna Be Down” remix and “Self-Destruction.” Lyte’s longevity in this male dominated industry is well deserved. Keeping the audience engaged, Lyte showed her ability to adapt by chanting the chorus to D-Boy, Big Sean’s latest single, “Blessed.”

EPMD was up next, letting us know that despite their past beef, they’re still, “Strictly Business”. They were looking hot as hell in their black hoodies, but their, “Chill” flow makes you wish that they were part of the Hip- Hop “Crossover”. They were in sync like the Wonder Twins, letting it be known that they’re,”Back in Business”; in my opinion, they’re one of Hip-Hop’s best duos.  In the middle of their set, DJ Scratch reminded us Hip-Hop heads of one of the many reasons why we still love H.E.R.; he scratched with two actual turntables instead of a digital device. The ‘Green-Eyed Bandit’ closed EPMD’s set with his hit song, “Music”. There was an instant surge of energy as soon as we heard Marvin Gaye’s voice signal the beat drop!

Following EPMD was Mr. “Smooth Operator” himself, Big Daddy Kane. Kane gave it to us “Raw”, and had the crowd begging for him to, “Warm it up Kane”! His methodical metaphors and dope dance routines were a “Symphony.” Kane has aged quite well; he was not “…half steppin”, further solidifying his rep as a Hip-Hop ladies’ man. To further prove that he’s more than just a handsome face, Kane blessed us with a mean freestyle that had the crowd mesmerized; he definitely “got the job done.”

I thought that my mind was “playing tricks” on me when Scarface crept onto the stage. He’s obviously lost a lot of weight and he’s not as tall as I thought he was, but nonetheless, “Mr. Scarface” swept

through like a quiet storm. He made the crowd, “Smile” by performing hits from the Geto Boys and his solo career. He showed the D mad love by wearing a “Detroit vs Everybody” t-shirt along with a fly Detroit Tigers baseball cap and Starter jacket. Even though we were at the prestigious Fox Theater, a cloud of “Mary Jane” covered the crowd. I bet some of them were exchanging “Fuck Faces” by the end of the night!

Though he’s not a dancer, the God MC, Rakim will still, “Move the Crowd”! He knows that his mere presence has a hypnotic effect; his “Juice”, is the epitome of true, unfiltered, original Hip-Hop. He is respected for his ability to sustain the core of who he is despite the trends. At one point, the “Microphone Fiend” stopped the music and listened to the crowd rap almost a whole verse of

“Paid in Full.”  He seemed proud that we knew how to “Follow the Leader”, and he said, “See, I don’t need a hype man!” Even though, he was decked out in some Brooklyn gear, Rakim made sure to get his own “Everybody vs Detroit” t-shirt.

For the Grand Finale, Ice Cube came, “Straight Outta Compton” and ripped up the stage like a, “Natural Born Killa”!

Although his career went Hollywood a long time ago, he’s still, “Gangsta, Gangsta.” Ice Cube showed his versatility by performing a mix of his hardcore and crossover hits for over an hour; his Westside Connection, partner, WC (Dub-C) played Robin to his Batman. His set included two large screens that showed a trailer for the upcoming N.W.A. movie, several group pics from back in the day, and of course a shot of him wearing a crown with his trademark facial expression telling us to, “Bow Down”. At one point, he told the crowd that he loves Detroit because it’s like home, needless to say, that geeked us up even more!

The line-up for this tour is simply genius. These artists represent the diversity that is lost in today’s Hip-Hop. I wonder how many of the present day artists will still be performing 25 years from now. Lauryn Hill’s “Superstar”, released in 1998, told a tragic, yet true, story about the decline of Hip-Hop that is reflected in too many of today’s Hip-Hop artists; thank God for old school.

2 thoughts on ““Hip-Hop Started Out in the Heart””